Madison’s Carl Craig Named League One Coach of the Month 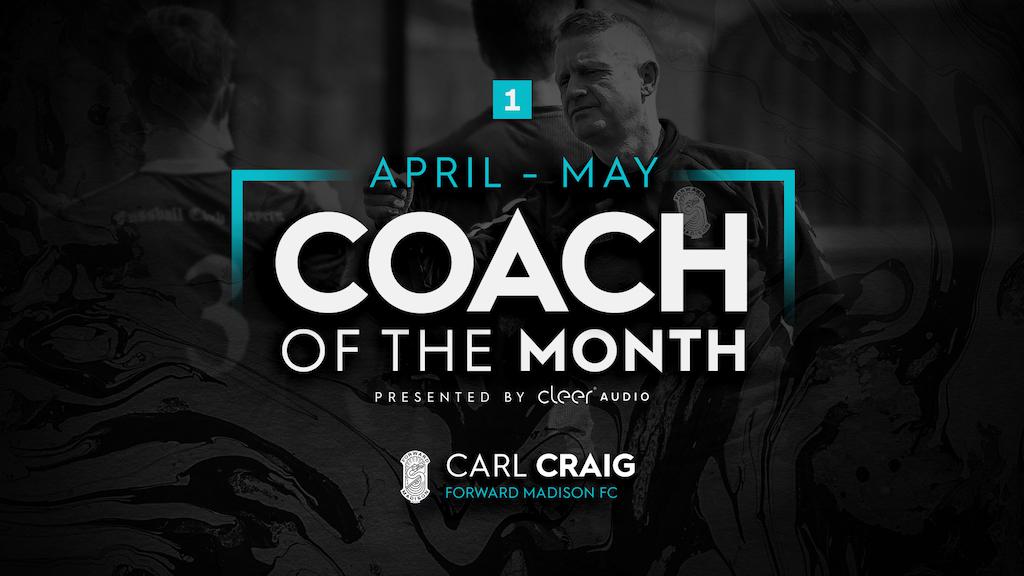 TAMPA, Fla. – USL League One announced on Wednesday that Forward Madison FC’s Carl Craig had been named the League One Coach of the Month presented by Cleer Audio for April and May. In four games during that span, Craig’s Madison went unbeaten and conceded only two goals in the Englishman’s first month in charge at the club.

Madison began and ended May by picking up points while rallying from second-half deficits away from home, coming back to draw 1-1 with FC Tucson on May 8 and doing so again to defeat South Georgia Tormenta FC 3-1 on May 29.

Between those two contests, the Flamingos won a pair of home games 1-0. The first, courtesy of a stoppage time goal from Derek Gebhard against North Carolina FC, gave Madison fans an amazing moment on their long-awaited return to the team’s original home venue Breese Stevens Field.

Later in the month, Craig’s side became the first team to defeat Union Omaha this season, snapping the Owls’ nine-game unbeaten run which stretched back to 2020.

“I think ultimately it was the collective effort from the lads,” said Craig of what led to the side’s strong start. “We’ve said it numerous times that we’re a nascent group, we’re new, we’re young. We’ve got the challenges, but I think the desire and the camaraderie from the group has been key to pushing on as we have done.”

Craig’s early season accomplishments arrived during his first season in Madison, with 11 of the 19 players in his squad also new to the club. The Flamingos ended the month of May in second place in the League One standings.

“Not only did we look to recruit good footballers, we also did our homework and background and checked out the players’ personalities,” said Craig of what has allowed the team to jell so quickly. “It’s not just a good footballer that I’m looking for. I’m looking for a fella who is - and it’s such a cliche - a team player.”

Craig applies that team-first attitude not only with his players, but with his coaching staff too.

“When you told me, I said, ‘I got the award? I didn’t get the award.’ Yeah, they’ve put my name there, but I went in straight away and shook [assistant coach] Neil Hlavaty’s hand,” said Craig. “This is a team thing. I’m just part of the team, and that might seem a little trite, but that’s what we are here. We’re a group, we’re a team, and everyone has their piece to play.”

Craig was voted League One’s Coach of the Month by the USL League One Technical Committee.